I Saw It By Ear

This show is in Spanish and has been re-broadcasted by Radio Tsonami from Valparaíso in Chile.

I Saw It By Ear is an exhibition in Rozenstraat, based on the recorded voices of artists describing an artwork to be. It is through their narrations that the artworks are activated in the mind of the public. The exhibition is loosely based on the idea of the Roman Room, a memory technique based on visualisations. Exposed on fixed locations but in multiple languages and at alternating times, an everchanging ‘overview’ is created.

The exhibition follows up on the project ‘Écfrasis’, which consisted of a double longplay that in 2017 recorded the voices by twenty-nine artists that once formed part of the art initiative Muro Sur. This auditory collection was inspired by the old literary tradition ekphrasis, that consists of describing a visual artwork in a vivid way by verbal or written language. The LP was launched in 2019 in the gallery D21 in Santiago de Chile, which marked the first presentation to a Chilean audience.

In 2021, in Amsterdam, Muro Sur founder Ana María Fernández Parodí and artist Martín La Roche in collaboration with Rozenstraat curator Madelon van Schie organized a new phase of the project. Sixteen artists of ‘Écfrasis’, coming from different Chilean backgrounds and generations, were invited to produce a new audio piece for the exhibition, occupying a space in between concept and materialization. The artists were chosen for the particular links in their works to the Netherlands, of which they will give an unforeseen panorama.

Please see below for a full list of all participating artists.

The audio pieces are situated in a specially designed ‘sound landscape’, made in collaboration with the design studio Cookies. Furthermore, the original longplay disc with all the art works and a documentary video of Muro Sur by Mónica Bengoa will be presented.

A public program in the shape of a podcast will be organized at Rozenstraat in collaboration with Ja Ja Ja Nee Nee Nee radio, which will extend the reach of the exhibition, and the artworks. The podcast will also be streamed by Tsonami radio in Valparaíso, Chile. The program consists of four episodes in which the concept of ekphrasis will be discussed in a broad sense, together with the participating artists, invited Amsterdam based artists and writers. A performance by artist Marcela Moraga will furthermore ‘spread the word’ through the city, and as such, bring the exhibition beyond the walls of the art space in yet another way.

All participating artists are connected to Muro Sur, an initiative that was founded by former cultural attaché from Chile in the Netherlands Ana María Fernández Parodí, together with a group of young artists she knew for some years, among them Cristián Silva, Mónica Bengoa, Voluspa Jarpa, Ignacio Gumucio and Mario Navarro. Its history goes back to the year Ana María moved back to Chile in 1996, after having been away for 23 years. The country was returning to democracy after many years of dictatorship and Muro Sur was born in a refreshed democratic context, as an answer to the lack of independent spaces to show experimental art. “The location for the exhibitions was the muro sur (‘southern wall’) of my loft – a wall of 6.00 m high x 3.60 m wide. I offered the place and the artists decided what to show. We acted with a spirit of reciprocal confidence. The reaction of the public was overwhelming after we developed a program of five individual exhibitions, including key names of contemporary Chilean visual art: Carlos Altamirano, Eugenio Dittborn, Eduardo Vilches, Paz Errázuriz and Gonzalo Díaz.” 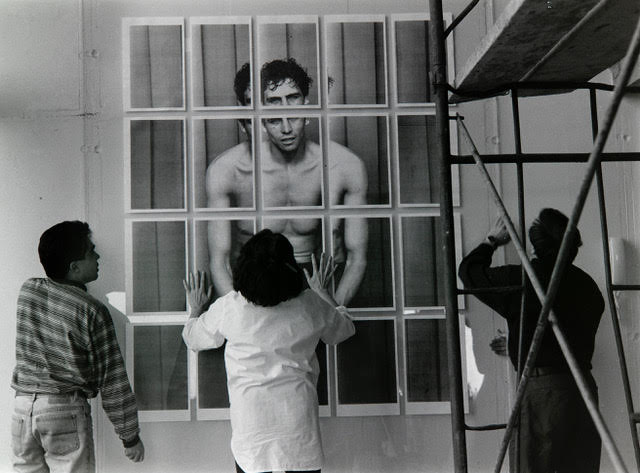